What makes a fish a fish?   The answers may surprise you. Fishes come in a wide variety of shapes, colors and sizes. Yet, not all sea creatures fall under the “Fish” classification. 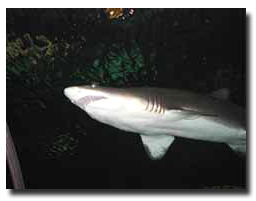 For example, a shark is classified as a fish, while a dolphin is considered a sea mammal, a member of the “Whale” family. The differences are fascinating. Nature is truly remarkable in its differences in various animals and fishes are no exception!

A dolphin and a shark differ in several ways:  For instance, a dolphin relies upon  breathing in oxygen more like a human than a fish. In other words, the animal must “come up for air,” in order to survive. A shark does not. A shark breathes through its gills to obtain oxygen from water. 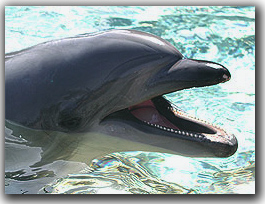 A Dolphin is a Sea Mammal, not a Fish

A dolphin is a mammal made of skeletal bone. A shark’s skeletal structure is not  comprised of bone, but entirely comprised of hard cartilage.

Some fishes, like sharks, reproduce by internal fertilization. This means the male deposits sperm into the female fish, where the eggs are fertilized inside of the mother. These fishes are called live bearers, which means that they give birth live young, not egg hatchlings. 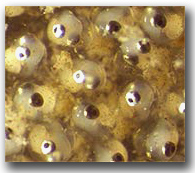 Most fishes reproduce by something known as, external fertilization.In other words, a female fish releases eggs into the water, where they are fertilized by sperm from a male. This process is called spawning. Many fishes simply release their eggs and sperm into the water and pay no attention at all to the fertilized eggs, but other fishes build nests and guard the eggs and young.

Fish eggs range in size from a barely visible – like a microscopic dot, all the way to the size of a penny. Some eggs float in open water, while others are heavier and sink to the bottom. Eggs on the bottom may clump together in masses, or even stick to various objects. Some fishes place eggs on the undersides of rocks or on sticks in the water. Some eggs simply fall into the spaces between

3. They use gills to get their oxygen from the water 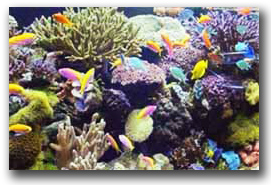 Many fishes develop bright colors during their breeding seasons. Usually it is the male that is more colorful. He uses his brightcolors to attract females. Color also makes it easier for fishes to recognize members of their own species. 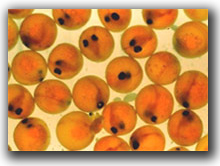 Notice how the eyes prominently show through, these salmon eggs early on in their  development.  Fish eggs may hatch within several days of spawning or  many weeks later, depending on the fish species, water temperature and other varying circumstances. 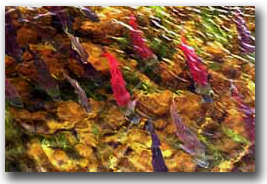 Many fishes move to special areas where conditions are just right for spawning and protecting their eggs. For some fish species, this is a matter of moving a few yards in a stream or into shallow water in a lake. But for others it can mean a journey of thousands of miles.

Some salmon species spend part of their lives in the salt water of the Pacific Ocean, but they travel many miles into freshwater streams and rivers to spawn.

Along the journey, their bodies change to a brilliant red color. Females release eggs along the gravel bottom, where they are fertilized by males. Both males and females die after spawning.

The young fish hatch and spend a year in the fresh water before traveling out to sea. Two to three years later, the salmon return to the river as breeding adults. They spawn, and the cycle continues. 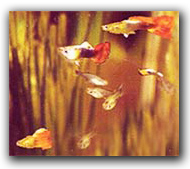 Juvenile freshwater fishes tend to resemble their parents, but most saltwater fishes have larval stages. These larval fish drift freely in the open sea and many are bizarre-looking, with odd shapes or long trailing fins. 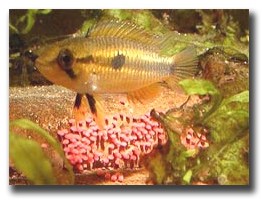 Most fish parents spend little time caring for their offspring. But some will guard their young nestlings for a few days after the eggs hatch. In a few species the adults carry eggs on their bodies. Some fishes actually keep the eggs in their mouths until they hatch.

When young fishes hatch they may look very different from adult fish of their species. A newly hatched fish may be nearly transparent, but in a few days they develop color patterns.

All of natures sea creatures are not only amazing in their design, but are a critical part of our eco system!