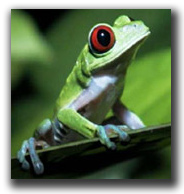 Like many other animals, Amphibians are vertebrates, which means they are animals with a backbone and an internal skeleton.
Most amphibians live part of their life in water and good portion of it on land. Some breathe through gills, much like a fish does.

Amphibians are unique, fascinating animals that are vast and varied in their make up and design. We can learn a lot by studying and understanding them. 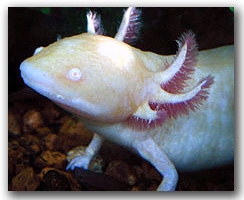 400 million years ago. Today’s amphibians are, of course, very different from their ancestral forms. They still require water due to their non-waterproof skin. While some of these animals can exist on land, many amphibians must return to the water, especially to breed and/or lay eggs.

Presently, some species of amphibian have become fully land-living, and give birth to miniature adults instead of laying eggs in the water.

The classification Amphibia represents somewhere around 5,000 species of carnivorous animals, arranged in three distinct groups. These are Frogs and Toads, Newts and Salamanders, and Caecilians.

A Caecilian – a small slender, limbless, wormlike, amphibian, belonging to the Gymnophiona order. Caecilians are a burrowing creature that live mainly in moist soil in tropical regions.

Sadly, amphibians are prey for many other animals – birds, mammals, reptiles, fishes, and even other amphibians rely upon these animals as their food source. 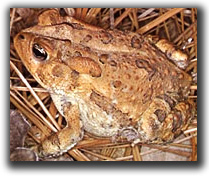 Amphibians are a fundamental part of the “Great Food Chain of Life.” In order for life to balance itself out, some animals must be sacrificed so that others may live.

Yet amazingly, amphibians have managed to survive for millions of years!

Imitating poisonous species can definitely help keep Salamanders alive, although certain salamanders actually have poison within their tails (the most vulnerable part of their bodies open to attacks). 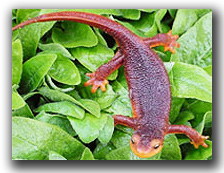 Some of these smart critters rely on the old trick of “playing dead,” while others protect themselves by biting. These incredible little animals can even scream and yelp! One unusual defense is the ability to survive inside the stomach of a predator! In a few cases, some amphibians have been noted to live as long as 30 minutes inside a predator’s stomach! This might be “hard to swallow,” but it’s true. Believe it or not!

Nature has provided some crafty little defense mechanisms for amphibians to protect themselves against predators. While amphibians may not have special weapons like claws or sharp teeth to defend themselves, they do have slippery, quick moving bodies and a very shy, quiet nature. This may not seem like much of a defense, but don’t be fooled. These are beautiful, resiliant creatures that have survived a very long time on this planet.
As another form of protection, many amphibians don’t show themselves in the light of day. They also have other survival tricks involving an attribute known as Coloration. There are several types:

Flash Coloration is different from Warning Coloration because it is not seen until the amphibian is under attack. 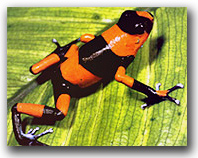 Their bright colors often times distract and confuse predators, which help the amphibians escape. Changing skin coloration is employed by frogs, toads, and some salamanders.

Some amphibians produce mild skin poisons, and others produce toxic secretions strong enough to kill predators, like the Poison-arrow Frog.

Warning Coloration is the opposite of Protective Coloration. Bright colors on the upper surface of the skin usually mean the amphibian has quite poisonous skin. 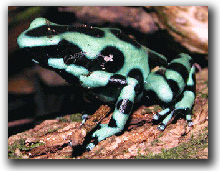 Predators who attack a brightly colored amphibian quickly learn to avoid similar-looking ones in the future. Protective Coloration is important to many amphibians, a large number of which are green, brown, or gray colors that are common in nature. These color patterns act as camouflage, helping amphibians blend in with their surroundings.

Tree frogs and other color-change artists, change their colors over time to match the background they rest upon. The world of amphibians is filled an amazing array of amazing creatures, all of whom are essential to our earth’s eco system and remarkable beings that have fascinated people of all kinds for centuries.